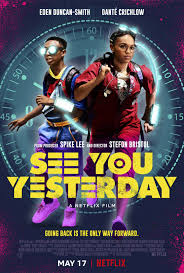 Stefan Bristol directs what on the surface looks like it wants to be a Disney film that pokes fun at the 80’s and includes a nod to Michael J. Fox. For some reason, Goonies even comes to mind. But Spike Lee is the producer so you know it won’t be light and fluffy, serious issues need to be tackled like his standards – racial discrimination and neighborhood issues. Beyond that, there’s grief and a strong black female lead, Eden Duncan-Smith looking for hope. Astro, the young man who plays Calvin, her brother, has a moment in the film in which he has such strong intensity, it encapsulates the entire feeling and message of the film. No neatly tied bow at the end of this film as director has faith in his audiences intelligence. As for the rest, sets feel like a Spike Lee film, music is good – didn’t really notice it, cinematography ok. You’ll need a small tissue box. A little too heavy for kids. Not sure I’d say date night worthy or a must see but an interesting watch.